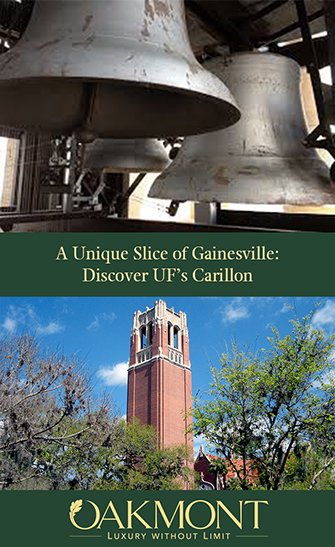 Its stature as the home of the University of Florida doesn’t hurt either. UF’s School of Music is a rich source of current and future talent, and it’s common to find students bringing their studies to life by strumming, spinning or singing in solo or group gigs around town.

Oakmont residents out and about will hear every genre of music around Gainesville. So, don’t be surprised to find yourself humming or toe-tapping as you enjoy a live band at Bo Diddly Plaza, a jazz trio at happy hour, or a headliner at the Hippodrome Theatre.

But, you probably wouldn’t expect to hear a carillon!

You might not realize it, but you’ve heard it if you spend time outdoors in Gainesville’s busy downtown, or anywhere near the UF campus. It resembles church bells pealing each hour, but it’s much more intricate.

In simplistic terms, a carillon is an instrument played like an organ, with a keyboard and foot pedals. A person who plays a carillon is a carillonneur. The carillonneur uses the keys (called batons on a carillon) and pedals to trigger a series of giant bronze bells that together, produce the melody. And we do mean giant. The bells are mounted on a massive steel frame, usually in a tall bell tower so that their sound wafts over the surrounding landscape.

“Carillon” is a French word. The instrument originated in 16th-century Belgium, then spread to other European countries. The Netherlands also has a rich carillon history.

Why a carillon at UF?

UF’s carillon dates to the mid-20th century, and is housed in the 157-foot-tall Century Tower. Built to celebrate UF’s founding, Century Tower is one the university’s instantly recognizable symbols. Alumni launched a fund drive to build it, with the dual purpose of honoring fallen alumni from World Wars I and II. It finally opened in 1956.

More than two decades later, a fund amassed from student fees and dedicated to performing arts, resulted in the purchase and installation of UF’s Dutch-built, 49-bell carillon in Century Tower. The original apparatus weighed nearly 58,000 pounds!

UF’s carillon first pealed on May 14, 1979. In 2003, renovations — in addition to a generous gift — added 12 more bells. The carillon you hear today uses 61 bells, the largest of which weighs 7,000 pounds. Furthermore, it’s one of only four carillons in the state of Florida.

The instrument is an important part of the School of Music. Student carillonneurs play it in a room at the bottom of Century Tower. It’s considered an honor to play the carillon at recitals and concerts. Visiting carillonneurs also perform on UF’s carillon.