Here’s another in our series of posts for Oakmont residents about side trips, road trips and local adventures designed to explore the greater Gainesville area.

Regardless of whether you’ve just moved into your new Oakmont home, or have been here but haven’t done much more than work, take care of the kids and perhaps school, you live in a fun, 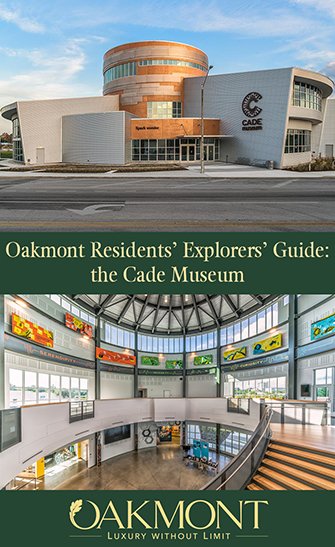 Gainesville itself is a lively, historic city. It’s also the University of Florida’s hometown, which is a major bonus. UF’s presence helps to attract and amplify an already prodigious artistic, cultural and athletic community.

And Oakmont’s convenient location on Gainesville’s burgeoning southwest side makes it only a hop, skip or jump from any local experiences.

So carve out a few hours of down time, or reclaim a weekend or two to explore your new hometown.

Museum with a twist

We say “museum” and you think “stuffy.”

Not so with the Cade! Think of it as the anti-museum, where you’ll learn a lot, yet be entertained rather than bored.

Located at 811 South Main Street in Gainesville, the Cade was founded in the mid-2000s by Dr. James Robert Cade, a University of Florida kidney specialist. He and his family established a foundation to fund and build the museum, which opened in 2018.

What is Dr. Cade’s real claim to fame (at least the public kind)? He and his UF research team invented the sports drink Gatorade in 1965, as an innovative way to hydrate Florida’s athletic teams.

The Cade’s Sweat Solution exhibit tells the story of Gatorade, from idea to the iconic hydration product we know today.

Because it was founded by an inventor, the Cade prioritizes imagination and creativity, and builds its programs and exhibits around those potentially life-changing traits.

You’ll find interactive exhibits and fun exercises in creativity labs that mix science with a lot of fun and laughs. The Cade’s Fab Lab in particular will have you dreaming up the the world’s next great invention, then “fabricating” it with handy office and shop supplies such as construction paper, soldering tools, scissors, printers, traditional toolbox tools and glue, among many others.

Probably lots of paper towels, too.

You’ll also take some of the fun outdoors, and have the opportunity to experience traveling exhibits that visit the Cade Museum.

Two spaces in the Cade are worth exploring on their own merit. Visit the Idea Atelier with its lofty, light-filled view, to brainstorm, play interactive games or gather a group to tackle solutions to projects or problems.

Visit the Cade’s Rotunda each Saturday to meet a real inventor and hear about his or her invention.

And, if you have children seeking summer activities, the Cade offers a menu of weekly summer camps for all ages.

Ready for your Oakmont lifestyle? Start the conversation here.

*Photos are Copyright the Cade Museum.